Madonna is a music and dance artist who needs no introduction. Seven letters, no last name, yet a powerful brand. Almost from the time she started her career in 1982 with her first single “Everybody” and her debut album Madonna, the talented singer and dancer rose to fame in the US first and only two years later worldwide after the release of her second album Like a Virgin.

Madonna at the TriBeCa Film Festival in 2008 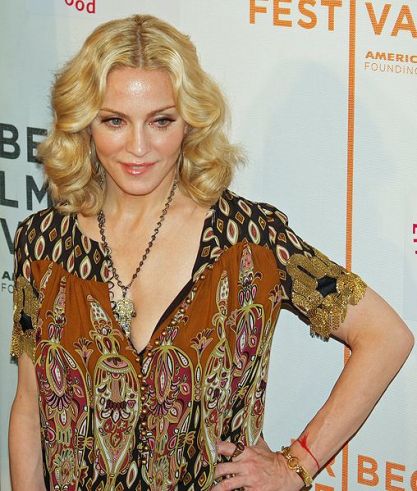 Few know that Madonna started her education with a dance scholarship at the University of Michigan and worked as a backup dancer when she moved to New York City in 1977. From there, it was only a small step to singing in two bands, Breakfast Club and Emmy. Madonna went solo in 1982 and already her third single, “Holiday”, became a big hit that kids around the world would play on their ghettoblasters (remember those “portable” stereos?).

“Like a Virgin” followed in 1984 and became an instead hit. With it, Madonna patented her trademark look that consisted of lots of lace, torn fishnet stockings, bleached hair, religious jewelry and skirts paired with capri pants. Girls and women all over the world began imitating Madonna, making her an ‘80s style icon.

Already in April of 1985, Madonna embarked on her first North America concert tour that did not fill clubs and theatre but whole arenas. It spawned hits like “Papa Don’t Preach”, “Open Your Heart”, “True Blue” and an all-time favorite of mine, “La Isla Bonita”. “Express Yourself”, “Cherish” and the controversial “Like a Prayer” followed.

Madonna during the Sticky and Sweet Tour in 2008 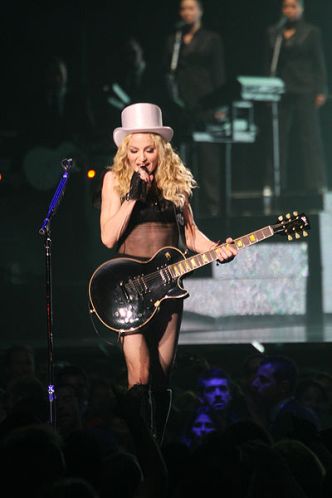 As to be expected, the topics and pace of her albums matured from ‘80s disco beats and boy-meets-girl romance to a broader spectrum. Classical and rock influences can be heard on the later albums and she broaches topics like sexuality, loss, parent-child relationships and many others. Never one to avert controversy, Madonna is an artist who’s forgiven for anything in the end, especially once she comes out with a new album or dance routine.

She is an artist who invented and re-invented not only her musical but also her personal self, even calling her 2004 word tour thus. Who could forget Madonna’s many avatars that took her from feisty ‘80s kid to vamp to mother in just three decades? Her hairstyles changed from short to long, blond to brunette and back to blond and her outfits, though daring, were and still are an inspiration to artists today. In one word, her guts and talent are enviable.