You’ve probably heard of chill music, ambient music, and world music.  But what about space music?  The term isn’t as “out there,” as you might believe!  In fact, it is quickly becoming recognized as a sub-genre of new age music.

Even though space music is more often described as a feeling, or a mood evoked from listening, perhaps its not surprising to hear that its often played at planetariums and in film soundtracks.

As described on Wikipedia: 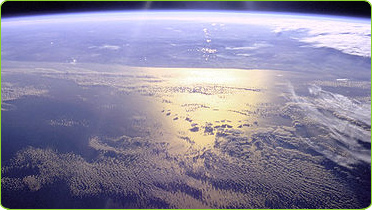 Floating above the world (image from Blatantworld.com on Flickr)

If you love to listen to relaxing music, this may be just perfect for your little spot in the universe!  Like its close cousin, ambient music, space music can relax and inspire you – especially if you listen with an “active ear.”  In other words, the music can provide a beautiful backdrop, but when you pay close attention, mental and physical health benefits may result.

Some of my favorite space music artists are Steve Roach, Michael Stearns and Kevin Braheny.

Surprisingly, the term “space music” was coined before new age and ambient.  But, while original descriptions of the genre included an expansive universe (if you will), today many people consider space music to be encompassed within new age or ambient.

Mike Oldfeild is the first vinyl I bought along with Supertramp and I might say I discovered something at the time! Changed my adolescence!

Common elements of space music include acoustic or electronic sounds.  Some singer songwriters have experimented with “space-y” sounds, but generally speaking the music is purely instrumental. Here is another composer Jonn Serrie who creates huge space music!

If you are still wondering about space music, consider this description from Anna Turner, a co-host and co-producer of “Music from the Hearts of Space.”  In 1989, she wrote an essay, “Space Music,” in which she stated:

“New Age Space music carries visions in its notes; it is transcendent inner and outer space music that opens, allows and creates space… this music speaks to our present moment, to the great allegory of moving out beyond our boundaries into space, and reflexively, to the unprecedented adventures of the psyche that await within.”

Instead of just talking about space music, let’s take a listen to Colonies from Equinox:

What do you think?  Is is worth taking a journey to space music?

Some of my listeners have noticed that Marcomé music includes space music elements and sounds. I would not qualify my music as totally space or ambient but I love to introduce natural sounds and play with layers.

Where will your favorite music take you today?  Will you make room for space music in your CD collection, or on your MP3 player?

If you enjoyed this post, be sure to see Journey Through New World Music and Musical Sounds in Nature.