I really started using Twitter in 2009, and it has changed my life. I met kindred spirits I never imagined possible. I’ve never been able to talk about such a wide variety of subjects and share my feelings and ideas about music all at the same place! I enjoy the direct and immediate contact and feedback that I have with my followers and fans.

If you would have told me that my best friends at work would be from all over the world years ago, I would have said, “How”? Now I know…. Twitter! 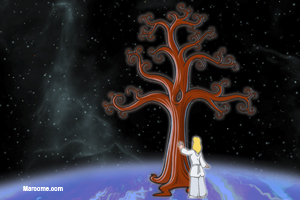 My first miracle on Twitter was the encounter with my London friend. He answered my first tweets and he kindly explained to me how Twitter worked.  He sent me links so to better understand how to use and what to expect on Twitter.  Right from the start, I was welcomed in a very special manner!

After a few weeks on Twitter I couldn’t go without noticing my Denver friend Reg Saddler @Zaibatsu. We ended up on the phone one night and Reg, noticing how much fun I was having on Twitter, asked me, “Why don’t you do a song about your experience on Twitter?”  The very next day, I started playing with words and phrases using the term Twitter.

I actually searched the dictionary and found these definitions for Twitter:

(of a bird) give a call consisting of repeated light tremulous sounds.

• talk in a light, high-pitched voice : old ladies in the congregation twittered.

• talk rapidly: he twittered on about buying a new workshop

I saw all those tweets traveling the web so fast, here, now, and everywhere! What a mass of people exchanging, sharing, communicating!  In my mind’s eye, I saw the birds on branches twittering not only their chants but tweeting about love, and the energy of nature that’s been behind my musical works my artistic life.

Then, I went in my studio and opened my Logic Studio sound software and started singing…Twitter me some Love. It came out naturally. After a few hours, the song was completely drafted and my first solo lyrics were finished! As if it was not enough, I thought that an additional male voice would fit in there so I asked singer artist Bruno Pelletier who kindly accepted to sing with me! I also wanted a real bass player and I knew who..! Wasn’t sure if he was available… I called Marc Langis who happened to be back in Montreal after 14 years of working with Celine. Marc gracefully accepted to put his magic touch on Twitter me some Love. This project is like a dream come true!

It was meant to be; the universe was twittering me its and I was expressing it through creativity.

Pretty excited, I sent the file to Reg and I guess he was surprised as I was – the Twitter Song was working fine! 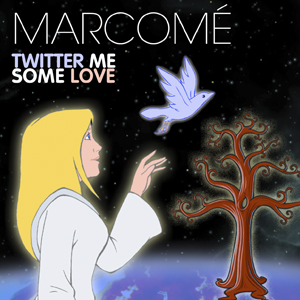 As if the universe was conspiring to help me out, I thought that a music video was indispensable. I just needed to find the right person to do it.

Recently, I had the opportunity to work with François Kiraly on mixing his new CD. After I had been talking with him about the song and Twitter music video, he proposed to help me produce the music video, which is being released with the Twitter Me Some Love song.

The genesis of the Twitter me some Love music video by Director François Kiraly:

I was inspired by Marcomé, the woman, the musical artist. She is a special music artist as she is warm, loving and loves to share her tremendous positive energy. Her love of life is contagious! That’s what inspired me to see her in an ethereal way…For some days, I lived with my impressions of her and drafted a character that would evoke not only femininity but also the yang aspect of the artist. I let my intuition guide me and the lady character got created in what I feel is Marcome’s avatar. 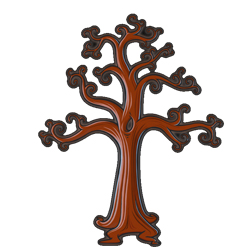 The girl in the clip is the avatar of Marcomé traveling the world like in “Tron”, traveling a virtual world, which in this case is Twitter.  I felt there was a universal concept behind the song, a planetary subject. With the regular 2D and 3D animation video mediums, I could better show the magic of the Twitter song. The bird is the guide that travels the earth.

Twitter is like a big collective phone. We then built an imaginary world conveying a metaphoric message … like a dream, a methaphoric universe, and a dreamscape.

One woman travels the world in her dreams guided by a bird (guide) and discovers herself through the stars growing on the tree of the web. The tree with the stars represent the web with the individuals.  The bird guides communication with the planet through the web.

Marcomé is an interesting musical artist to work with as she is passionate not only about music but visual arts. I wanted to keep this in the music video. I used bright colors, nature, love and the ability to communicate passion and music that will appeal to those who are searching for well being through music. 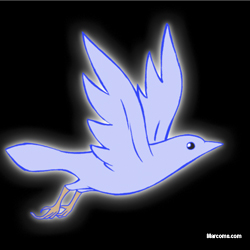 My gratitude to Veloce Animation where Francois concocted this colorful music video. A huge thank you to Martin Poirier for his crazy creativity! I am so excited to release Twitter Me Some Love!  I hope you discover some of your own miracles in the celebration of the special connections that are made with Twitter.