Over the past 12 years, my new age albums have been reviewed many times.  A few of my favorite descriptions include “ethereal voice,” “soothing music,” and a voice that “floats like a gossamer veil upon a warm breeze.”  Whether my work is classified as new age, ambient, new world, or pop world music, it transcends boundaries, perhaps to a category of its own.

You may already know me as a Canadian female vocalist, but did you know that I compose, produce and engineer the tracks you enjoy on my albums?  You may listen to relax, but I hope that the music will also energize and inspire you.  Come, listen to a few tracks, and read what others have had to say…. 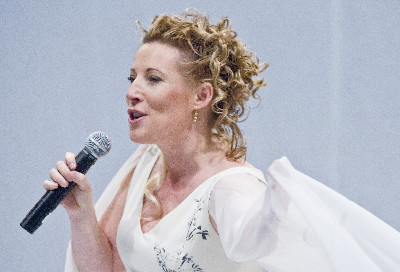 PJ Birosik, of the Monthly Aspectarian reviewed Seven Seas in 1997:

“India has Sheila Chandra, China has Dawada and the British Isles boast Enya. Now Canada has a super songstress whose mostly wordless vocals display anew why the human voice is that most incredible and flexible of all instruments. But unlike Enya’s sometimes strident strains, Marcomé keeps her voice floats like a gossamer veil upon a warm breeze. Enchanting lyrics are related in breathy murmurs she weaves magical tales of a shining boy with silver eyes, a dancer transcending the rhythm of time and a lover whose memory still holds the power to light a fire inside. Intoxicating yet subtle percussion accents created by ankle beads, sandpaper and wind chimes help heighten the otherworldly feel of Marcomé’s music, making this an album which one wants to hear again and again.”

River of Soul was reviewed by Russell Elliot in 2007 for Musical Discoveries (on contemporary, progressive and crossover female vocalists).  I love these excerpts:

“There is a purity and wonderful clarity in Marcomé’s exquisite vocals. The amalgamation of varied sounds creates an ethereal feel to her creations. Her debut album, Seven Seas, was released in 1995. She began writing new compositions for River of Soul album in 1998 for this 2007 release.”

“Marcomé is a vocal stylist with a pure and strong voice. By layering her vocal tracks and by understanding the subtle use of space, reverb and time delay, she has been able to create an ethereal voice – an instrument in itself. Marcomé also creates her own languages by using various poetic devices. From this she gets a new and fresh vocal and musical sound.”

Finally, RJ Lannan chimes in with his critique of River of Soul for the New Age Reporter.

Dreamy, echoing voice invokes the essence of promise in the first track Dawn’s Spirit. As the golden sun rises, it ignites the potential of a new beginning, a new day, and a new sense of optimism. The track River of Life captures the character of the whole album. That is that the energy, the flow and the emotion that the river of love and faith are stronger than ever.

“Come and run in the river,
Let the waters rejoice in your life.
In my hearts beats the river,
Full of laughter for love and for life.”

Special thanks, as always to Michel Robidoux, Michel Dupire, Marc Langis, Bob Cohen, Francois Myrand, Davy Gallant, and Guido DelFabro for helping me showcase my “ethereal voice” in these albums!