I asked this question in a previous blog post: should my music be classified as new age or ambient?  New age music has certain connotations that may not be preconceptions when listeners are offered the opportunity to listen to “ambient music,” instead.

Yes, its true that my home site, marcome.com, notes that I have been reviewed as among the best female New Age singers in the world.  But does my music fit neatly in the music genre?  Or, does “New World” speak more definitively about the musical message of my work?

Perhaps the answer is different for each of my albums, or even down to individual tracks.  My first two records, River of Soul and Seven Seas, display unique musical personalities.  Then, in Marcomé Remixed, two additional albums have been created that express different interpretations of the original songs (River of Life Remixed and Arabica Remixed).  Some tracks may inspire you to dance, while others may help you unwind at the end of a busy day.

New age music is described in various fashions in publications on-line, in print media and, of course, through musical releases themselves.  Wikipedia states, in part:

“The harmonies in New Age music are generally modal, consonant, or include a drone bass. The melodies are often repetitive, to create a hypnotic feeling, and sometimes recordings of nature sounds are used as an introduction to a track or throughout the piece. Songs of up to 30 minutes duration are common.”

While I invite you to relax to my songs, I hope that they do not “hypnotise” you as much as inspire you!  Unlike other types of new age music, I choose not to include recordings of natural sounds or electronics in my tracks.  Yet, there definitely are aspects of new age music that are applicable to my albums. 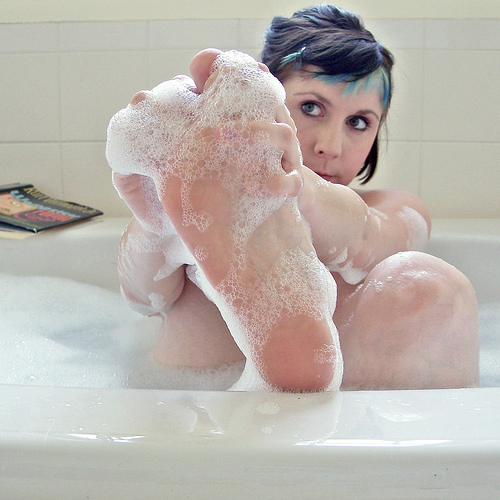 Would you prefer new age music or ambient music? (image courtesy of riot jane on Flickr)

Now, contrast the “New Age” definition on Wikipedia to its description of “Ambient music“:

“Ambient music is a musical genre that focuses largely on the timbral characteristics of sounds, often organized or performed to evoke an “atmospheric”, “visual” or “unobtrusive” quality. Ambient evolved from the early 20th century music of the impressionists, composers such as John Cage, Morton Feldman and minimalist composers and early electronic composers of the 1960s and 1970s, to rock musician Brian Eno, who is responsible for coining the phrase ambient music in the manifesto liner notes of his 1979 album Ambient 1: Music for Airports.”

Here is another sample track of my work:

Should we come up with an entirely new music genre classification for the unique qualities of Marcomé, or would you stick with new age or ambient?