Tori Amos: Music has always been healing for me

“Music has always been healing for me, since I was little. I can really be in pain, then listen to or play music, and I feel things…ease. I feel the music play me, so that I become an instrument that it plays.”

Tori Amos performing during her Dew Drop Tour in 1996 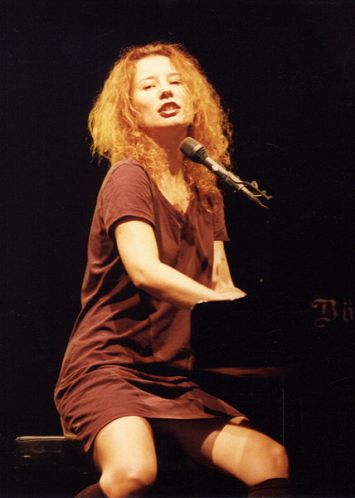 I recently came across this quote by Tori Amos and found myself nodding vigorously. Having been in physical pain for the past few months now, I feel better whenever I listen to music or sing. It makes me forget the pain and move on. When listing to Tori Amos, one gets transported into a strange world of soft words and harsh lyrics that cause a dissonance that is intended.

No stranger to pain, Tori Amos is an intense artist and performer whose voice, words and visuals don’t leave their audience for quite some time. Gutsy and honest, she uses her songs to say out loud to the world what she going through and what moves her: be it sexual assault, break-ups, miscarriages, marriage and motherhood – in that order. As founding member and spokeswoman for The Rape, Abuse & Incest National Network (RAINN), she shows that activism is something we all can engage in – regardless of how busy, ashamed or famous we are.

Born in North Carolina in 1963 into a very religious home (her father is a Methodist pastor), Tori’s musical talent shone threw from the age of two when she started playing the piano. By age five, she was already composing instrumental pieces and won a full scholarship to the Peabody Conservatory of Music. After six years, the school asked her to leave, however, which Tori claims was due to her difficulty reading sheet music and her preference for rock ‘n roll.

This didn’t hinder Tori’s career – she won numerous singing and composing contests and starting performing in bars in clubs from the age of 13. At 21, she moved to Los Angeles to perform her music career full time. Two years later, she founded her first band – Y Kant Tori Read – and in 1988, the band’s self-titled album came out, which wasn’t a commercial success.

Each album was accompanied by an elaborate tour – always a treat for fans as concert pro Tori Amos is known for her spellbinding live shows. Apart from the ones mentioned earlier, her most successful songs to date are “Caught a Lite Sneeze”, “Professional Widow”, “Spark”, “1000 Oceans” and “A Sorta Fairytale”. By the end of 2005, Tori Amos had sold 12 million albums worldwide and has been nominated for 10 Grammy Awards.

With so much talent, it’s hard to pick just one song. Listening to various albums and comparing her various styles is a treat that one should indulge in once in a while.