I’ve always been fond of jazz music and one band that I’ve followed almost since its inception is the Pat Metheny Group. Currently comprised of Pat Metheny, Lyle Mays, Steve Rodby and Antonio Sanchez, the four-member group takes jazz and jazz fusion to a new level. The orchestration is an assortment of robotic instruments that Metheny controls with his guitar and foot pedals – a CD by the same name was released in 2010.
Love has strings attached – Pat Metheny at the Milano Jazzin’ Festival 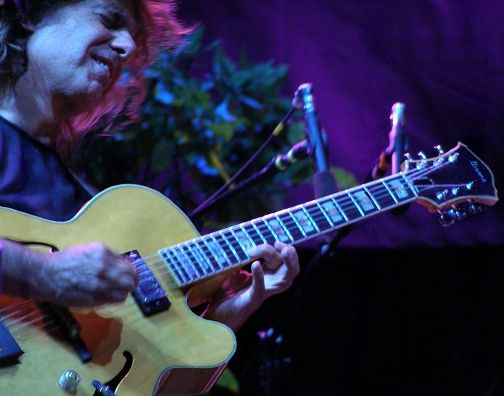 Image: Mattia Luigi Nappi
Back in 1986-1991, I had the privilege of working a few times with Pat and Lyle and those are moments I’ll never forget. The first time was in 1988. Pat was playing alone with his Synclavier some tracks from cd The Secret Story. He was making the live soundtrack to a wonderful choreography of the Ballet Jazz de Montréal.

Another great encounter was at the memorable outdoor concert on McGill College at the Montreal Jazz Festival back in 1989 where more than 100,000 people gathered around those amazing artists. On both occasion, I was working as a sound engineer for the Recording Mobile Facility, having the privilege to be on stage and in the best listening conditions, a pure blessing to my ears!

Pat has been fascinated by instruments and the way they work since he was a little kid. It started with an old player piano – a mechanical piano – that he dissembled and reassembled in his grandparents’ basement many times. He started playing the trumpet when he was only 8 and switched to guitar when he was 12, followed by many electric and acoustic instruments. The Orchestrion is what currently keeps him busy. He describes it as follows:

“Orchestrionics” is the term that I am using to describe a method of developing ensemble-oriented music using acoustic and acoustoelectric musical instruments that are mechanically controlled in a variety of ways, using solenoids and pneumatics. With a guitar, pen or keyboard I am able to create a detailed compositional environment or a spontaneously developed improvisation, with the pieces on this particular recording leaning toward the compositional side of the spectrum. On top of these layers of acoustic sound, I add my conventional electric guitar playing as an improvised component.”

Like Pat, his long-term collaborator keyboardist Lyle Mays was also born into a musical family and drawn to jazz early on. Lyle met Pat at the Wichita Jazz Festival in 1975 and the rest is history: The Pat Metheny Group was formed in 1977 and Lyle has been an integral part ever since, collaborating with Pat on 15 albums over three decades.

The Pat Metheny Trio in Pittsburgh in 2003 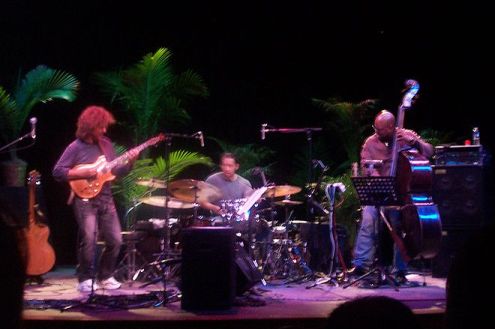 Who could forget the band’s 1980 breakthrough album, American Garage that crossed ever onto the pop charts after being #1 on the Billboard Jazz charts? Offramp (1982), Travels (1983), First Circle (1984) and the soundtrack album The Falcon and the Snowman (1985) followed in rapid succession.

As much as I liked the early albums, the band’s strength has been to innovate and come up with new sounds, be it Brazilian inspired rhythms or electronic sounds, thus breaching into fusion, world and even rock music. I have all the Pat Metheny Group’s albums but my favs are; As Falls Wichita, So Falls Wichita Falls, Offramp, Secret Story, Letter from Home, Speaking of Now, First Circle and Imaginary Day. I also enjoyed very much Lyles Mays 1986 cd.

Hope you enjoy those great musicians as much as I do! They really contributed to make the music artist that I am today! Marcomé
Other posts you may enjoy: More on New World Music with Womad, Peter Gabriel, More on Pop Music with Annie Lennox, Sade, More on Marcome’s world , Enjoy best New Age Music, Fantastic New Age Singers, Loreena McKennitt.