It’s always fun to follow the path of a fellow Canadian musician and Loreena McKennitt is one musical colleague who has inspired me early on. Back in 1988 when I was a sound technician for le Studio Mobile, I had the opportunity to work a few times with that highly professional lady. Especially fascinating is Loreena’s musical travel writing, a term she coined herself for her music-related travel that has inspired new albums. Travel is something that inspires my music as well and I can greatly connect to the inspirational push it provides for anyone in a creative profession. 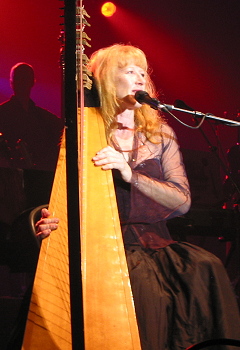 According to McKennitt, her first album Elemental was recorded in the summer of 1985 “in a barn in Southern Ontario amongst a field of sunflowers.” This romantic setting and connection to nature is important for the singer who debuted on the self-recorded album also as a harpist and with musical settings of poems by Yeats and Blake. In fact, the artist researches each album’s topic carefully. For Elemental, inspired by Celtic music, she flew to Ireland to study the country’s music, folklore, history and culture.

“Celtic history would become my creative springboard. Musically, I came to learn of, and be inspired by, many groups and artists ranging from those who authentically recreate its traditional forms to those who, like Brittany’s Alan Stivell, seek to mould it into something new and innovative,” says the singer on her website. 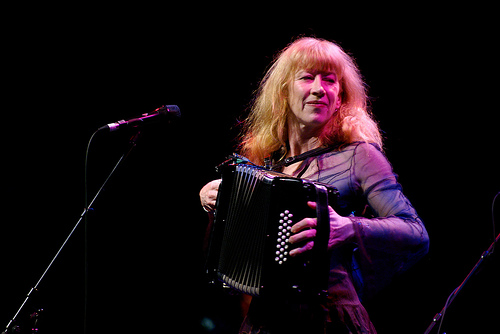 Loreena McKennitt playing the accordion at a performance in 2008
Photo: Lielo

McKennitt says about her fifth album, The Mask and Mirror, released in 1994: “I began my journey in Galicia, the Celtic corner of Spain. … I looked back and forth through the window of 15th century Spain, through the hues of Judaism, Islam and Christianity, and was drawn into a fascinating world: history, religion, cross-cultural fertilization.” The result is an album that blends Celtic, Spanish and Arabic influences and lures listeners with instruments ranging from cello and uillean pipes to dumbeg, tabla and oud.

In her seventh album An Ancient Muse, released in 2006, McKennitt reveals that she followed the Celts’ “easternmost paths, from the plains of Mongolia to the kingdom of King Midas and the Byzantine Empire.” That brought her further into research about the various cultures along the Silk Road and the different instruments they used. As a percussionist, I’m drawn to this album because it features the harp and accordion plus unusual instruments like the hurdy-gurdy, the oud, lyra, kanoun and the nyckelharpa, a Scandinavian keyed fiddle, in breathtaking recordings. No wonder it was nominated for a Grammy award in 2008.

Loreena McKennitt has released eight studio and four live albums so far plus various compilations – all worthy of listening to over and over again. Her website, Quinland Road, provides more information about the themes and history of each album and there’s more information here too.

(from the song “The Mystic’s Dream”)